Yes, this post about the 4th of July is long overdue.

Three and a half weeks ago, we enjoyed a pretty awesome Independence Day celebration.

Jessica and Brent had us over for a cookout at their house, which is in the middle of nowhere. But, strangely enough, the little rural fire department just down the road from their neighborhood hosts an impressive fireworks show every July 4th, and this year, we were invited to set up our tailgate chairs in Jessica and Brent’s front yard, sip a cold beer or three, and enjoy the festivities!

The party itself was fantastic. Great company, of course (much of the same bunch we hung out with at the wedding a few months ago), but also, great food!

Brent made a spicy and delicious low country boil. We stuffed ourselves with salads and sausage balls, red-white-and-blue Rice Krispie treats and a crazy chocolaty layered dessert in a trifle dish, a loaf of my very first sourdough, and the blueberry cherry clafoutis that you see here: 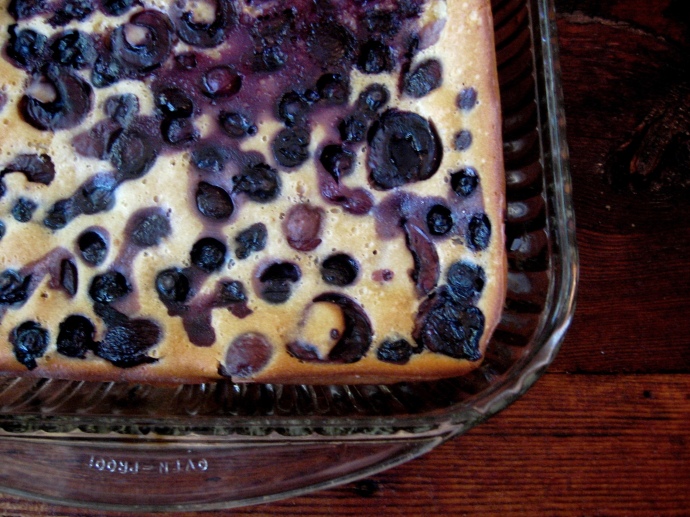 I was going for a red, white, and blue dessert with the cherries, blueberries, and custardy cake, but as you can see my dish turned out to be a little more like deep purple and warm, golden brown. Not that I’m complaining. 🙂

This sweet treat was inspired in part by an abundance of fruit in my refrigerator, but I doubt I would’ve thought of it on my own without some help from my blogging friends.

Unable to decide which recipe to follow, I combined the two.

Not willy-nilly, either–I actually made myself a little chart to compare techniques and quantities of ingredients between the two recipes, then merged them into one. (Yes, I’m a nerd.)

I loved that Putney Farm spiced their clafoutis up with lemon and cinnamon, but Daisy’s recipe proved easier to execute because it didn’t involve individual ramekins or cooking the cherries first.

And, of course, I made a few changes of my own, subbing blueberries for half of the cherries and Greek yogurt plus 2% milk for the whole milk/heavy cream.

Having not made or eaten a clafoutis before, I can’t tell you if mine turned out to be technically correct, but I can describe it for you: imagine a dessert that’s part-cake, part-custard, and bursting with fresh fruit–without being super-sweet. That’s exactly my kind of dessert, and if that strikes your fancy, I’ll bet you’d like a clafoutis, too!

Now that I’ve made my first clafoutis, I’m interested in trying other variations.

First, I think next time I might reduce the amount of flour just a bit (and maybe also reduce the baking time or temperature) to see if I can achieve a more custardy, less cakey result.

And while clafoutis is traditionally made with cherries (which I adore), they’re not really suited to hot, humid Southern summers, so next time I’ll probably experiment with some local and seasonal fruits like figs or peaches, which grow all over around here (even in my yard, when the pesky squirrels don’t get them first!).

Of course, Wikipedia informs me that once you vary from cherries, your dessert is now properly called a flaugnarde…but please forgive me if I fudge a little and call mine clafoutis anyway. It sounds prettier. 🙂

I’m a Georgia native (born in Royston, raised in Hartwell, settled in Athens). I live in a 100-year old house with my husband, Micah, and two fluffy cats, Cheesepuff and Magellan. You’ll get to meet them if you keep reading
(and I hope you will!).