birthdays are better with ratatouille

I’m turning 30 on Friday, but this post is about a much more famous birthday.

All you foodie folks probably know that Julia Child, if she were still alive today, would be one of those 100-year-old ladies that Willard Scott always used to introduce on the Today show.

(Does he still do that? Is he even still on the show? I haven’t watched in a decade or two…)

What amazes me about Julia Child?

She wasn’t French, and yet she brought French cooking to America before people could just plop down at a keyboard and Google recipes for beef bourguigneon or ratatouille.

She got people excited about cooking outside their comfort zone.

And she wasn’t pretentious or snooty about French cuisine–her vision was that everyday people could use everyday ingredients to make delicious food. She was down-to-earth, funny, and so charming.

I can’t say Julia’s been a direct influence on my life as a cook, because I don’t own a copy of Mastering the Art of French Cooking (though I’ve adapted a recipe from it at least once) and honestly am not sure I’ve ever seen a full episode of her show.

But she has influenced my cooking–and your cooking and everyone else’s cooking–the same way the Beatles forever changed the face of pop music.

Rock and pop bands today, whether they enjoy the Beatles’ music or not (or, for that matter, whether they’ve ever heard of the Beatles or not) have been influenced by Fab Four. Music today is different, and better, because the Beatles existed.

And cooking nowadays is different, and better, because of Julia.

Two weeks ago, I was headed to my good friend Amy’s house for a cookout. Her husband was grilling cornish hens, another friend was bringing bread, dessert was covered, and I was supposed to bring some sort of vegetable.

I had only been back from Portland for a couple of days at this point, and Micah and I had picked up a few things from Daily Groceries, but we didn’t have a lot of any one vegetable. That made it kind of hard for me to come up with any single side dish.

What did we have? Garlic, an onion, a few tomatoes. One eggplant. A huge summer squash. Three bell peppers.

Ratatouille, it turned out, was not just a practical solution for combining all those yummy summer vegetables. It was also delicious, and a natural complement to Trey’s perfectly grilled little chickens.

Julia Child inspired the recipe I used, which was posted by Priya on her lovely blog, quête saveur. Of course, I not only multiplied the recipe by 1-1/2 for our large group, but I also made some changes. My apologies, Julia!

What did I change? I cooked the vegetables slightly out of order and all together instead of in batches to make this a super-easy one-pot dish. And I seasoned my ratatouille differently from how Julia wanted me to, because I didn’t have any parsley but did have some other stuff that seemed like it would work.

I don’t know how my results compared with Julia’s vision, but this ratatouille was darn good.

The best thing about ratatouille is that it can be enjoyed in so many different ways.

The night I made the ratatouille, we ate it as a side dish with those aforementioned cornish hens.

The next day, I used the leftovers as a salsa for brunch of leftover steak frites and eggs: 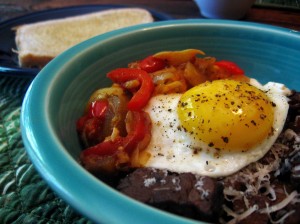 And I made a second batch at the end of last week, which we ate as an entree. First over some steamed brown rice (which was kind of bland) and then over polenta (oh, my goodness! highly recommended!).

The last of the ratatouille and polenta was also my lunch today, chosen over several other lunch options because, of course, I wanted to commemorate the Julia who inspired it. 🙂

One thought on “birthdays are better with ratatouille”

I’m a Georgia native (born in Royston, raised in Hartwell, settled in Athens). I live in a 100-year old house with my husband, Micah, and two fluffy cats, Cheesepuff and Magellan. You’ll get to meet them if you keep reading
(and I hope you will!).